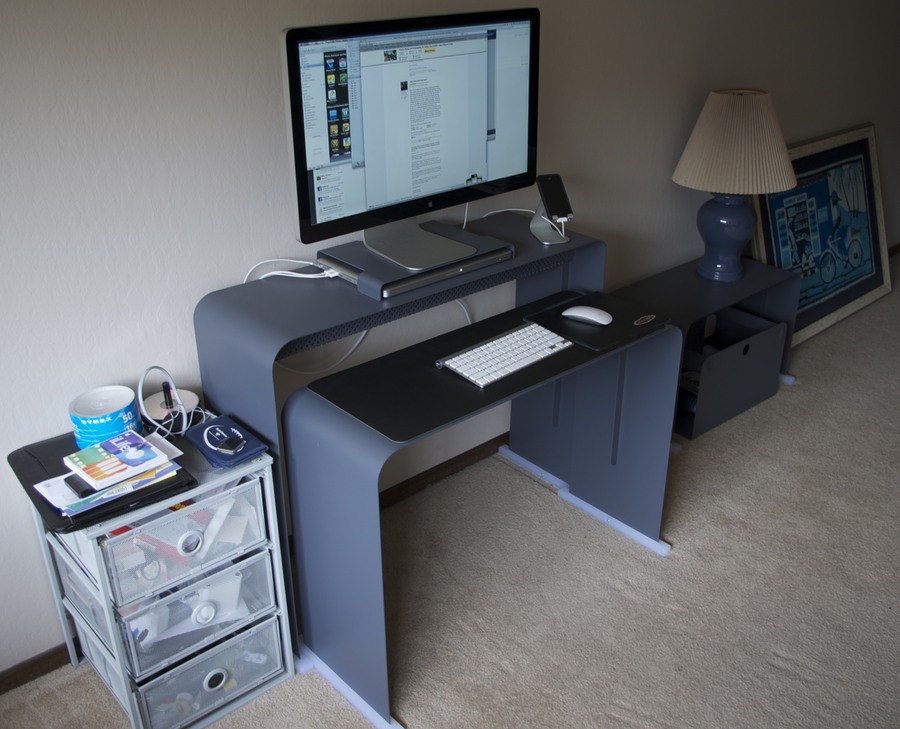 I was sick of my old desk. In fact, it wasn’t even a desk really. It was a big glass Ikea table that I used as a desk. It worked just fine for me, but I got sick of cleaning the glass, and the glass actually just rested on top of a metal stand, and I got sick of the glass getting knocked around. Also, it was really big. I wouldn’t say I actually started actively looking for a new desk, but my eyes were open. Then one day I stumbled upon the Heckler Design OneLessDesk over at the MacRumors forums. I did some research on the desk, and I knew I had to have it…After researching the desk, it became clear to me that the dual monitor setup (pictured below) that I was used to would no longer work if I got the OneLessDesk. There simply wasn’t enough room. I was okay with it because I had gradually upgraded my monitor size over the years to the point where I didn’t really need two monitors anymore, now that i was rocking a 27″ Apple Cinema Display. I knew that I could use my MacBook Pro in clamshell mode  anyways. But if I got the OneLessDesk, where would I put the MacBook Pro? The BookArc seemed like a nice option, but even that wouldn’t fit properly on the upper shelf of the desk. I finally decided on the Laptuk. This would allow me to put my MacBook Pro on my desk and have the Cinema Display sit on top of it. With that out of the way, I decided to take the plunge. 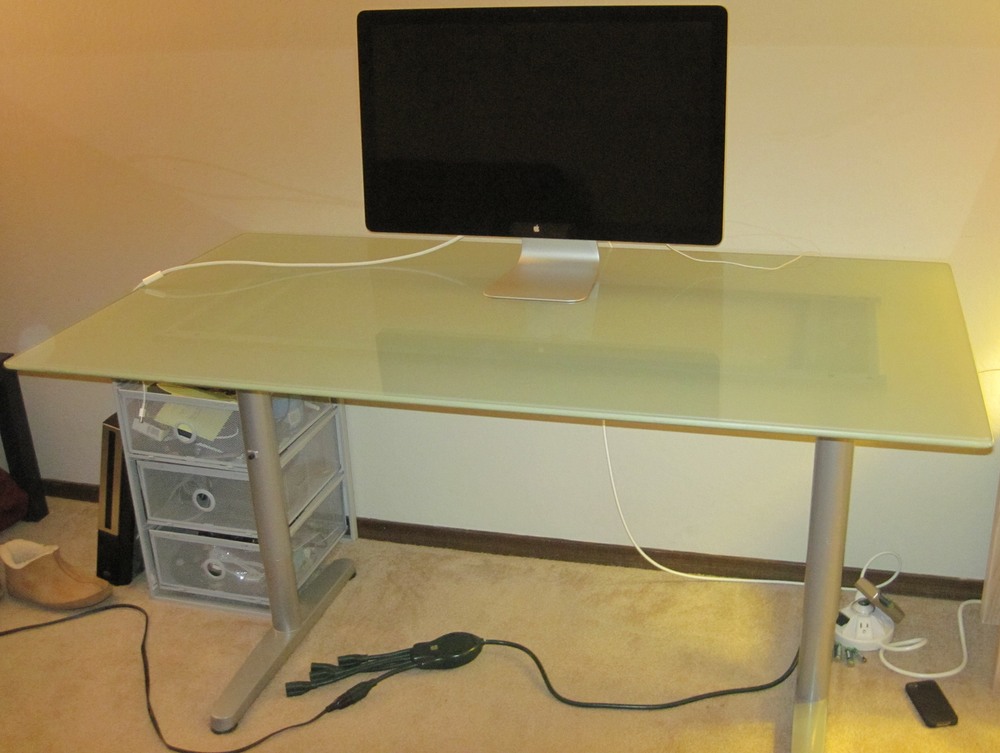 Heckler Design sells a bundle called the OneLessOffice. This includes the OneLessDesk as well as the OneLessFile and OneLessStand. It’s basically a hanging file drawer and stand to go along with your new desk. The neat thing is that if you stow them all together, they line up nicely. Before ordering, I had one last reservation. I read online that the Laptuk did not quite match the color of the MacBook Pro / Cinema display, as it was made of steel and the designers merely colored  it to look similar to the Apple devices. I didn’t want a mismatch so I asked Heckler Design if they could put my Laptuk through the same powder coating process as my OneLessDesk, in order to have the two match. The people at Heckler Design were EXTREMELY friendly and let me send it to them and get it coated for a nominal fee. Thanks, guys!

I plunked down the cash, and I decided to go with the entire OneLessOffice. I was thinking that I could use a stand to replace my old wooden ikea stand, and while I probably wouldn’t put any files in the OneLessFile, I surely could think of something to put in there!

The desk took a while to arrive as they did not have enough in stock. They also shipped the OneLessDesk and OneLessStand before the OneLessFile and Laptuk, as those had not been powder coated yet. The box for the desk and stand arrived, and it was HEAVY. Time to take down the old Ikea desk! Setting up the desk went without a hitch. The only assembly required was to screw the plastic sliding feet onto base of the desk, and then I was good to go! I had been hyping this desk up to myself for a while, and once it was finally set up, my first feeling was a bit underwhelming. It looked nice, but… it was just a desk, not some magnificent modern design piece that I had been getting so excited about. Oh well – I went to bed, and I would set it up in the morning. 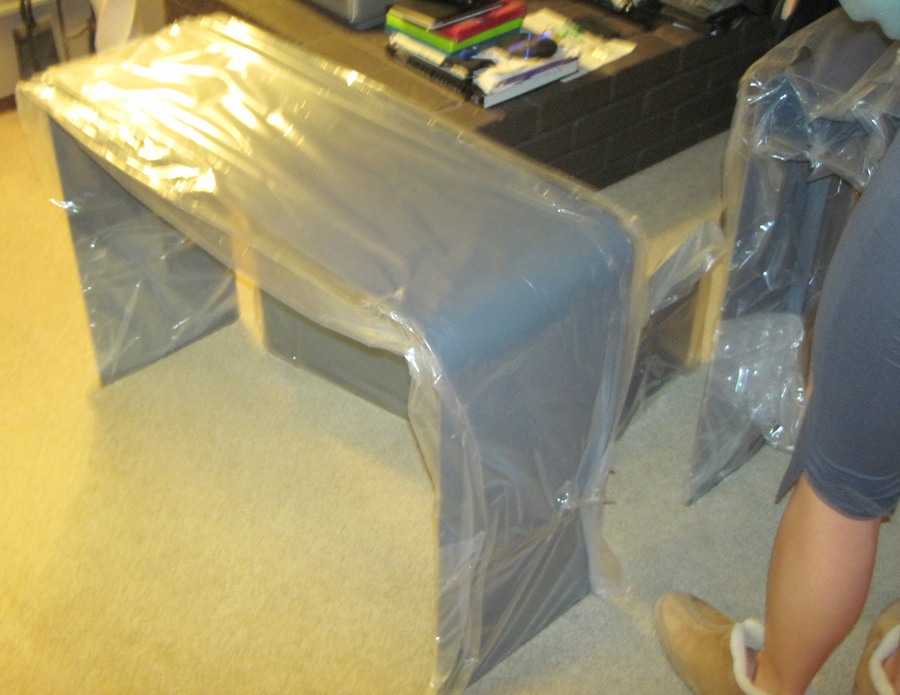 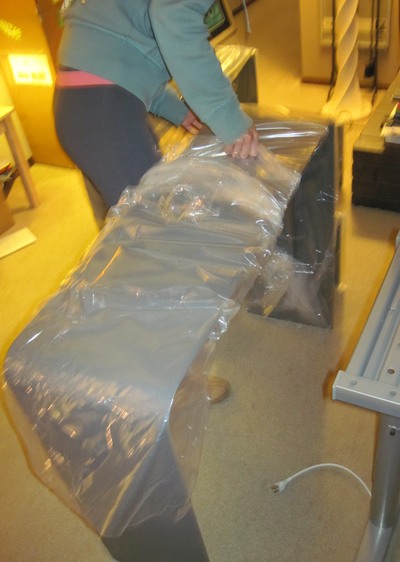 The next morning, I started setting up my computer. The Laptuk and OneLessFile had not yet arrived so I set the Cinema Display directly on the desk, and I just put the laptop on the floor. I set it vertically against the OneLessDesk, and in hindsight, this is actually a pretty good way to use the desk with a laptop. Perhaps if I had a magazine rack or something similar to put my laptop in it would have sufficed as a more permanent solution. With that out of the way, it was time to set up the keyboard and mouse. I use the Apple Bluetooth Keyboard, which I really enjoy, and I use the Bluetooth Magic Mouse with a Razer Exactmat mousepad. This brought me to my next snag. Despite the fact that the OneLessDesk has a soft surface that lays upon the lower desk unit, I found it too rough for mousing. So I had to use a mousepad. The Exactmat was the mousepad I was used to using, but it was too large to fit on the OneLessDesk – yes… the desk is that small… I like the smooth, plastic mousing surfaces, and I began the search for a replacement. I finally came across the func surface. This one was significantly smaller so I ordered it. While it still fits, it’s actually still not perfect. I like to have the keyboard perfectly centered in front of the monitor and when the keyboard is centered, the mousepad doesn’t perfectly fit to the right of it. Thus, it slightly hangs off the side. It works just fine, but it’s not the most pleasant to look at – and let’s face it… if you bought this desk, you probably did so at least partially because of how great it looks. 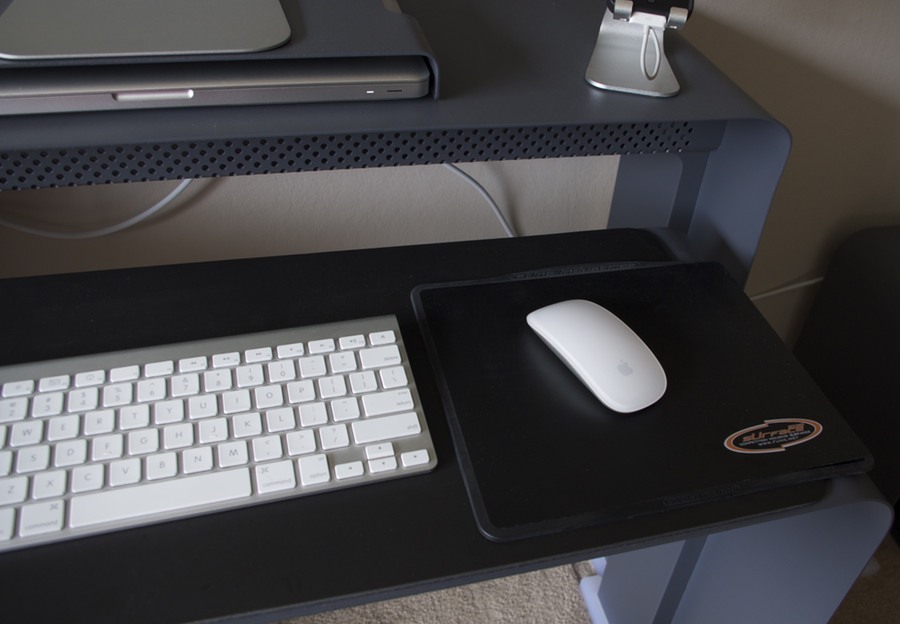 So life went on with the OneLessDesk. I enjoyed the space I saved from having it, and I thought it looked quite nice in the living room. It definitely made the desk look more like a piece of furniture against the wall and less like a large object that consumed most of the room. The lower part of the desk slides in and out relatively easily on the carpet, but you need to look closely to make sure you pull it evenly on both sides, since there are no runners or anything like that. Also, be careful when you pull out the lower desk. There’s not much clearance between the top of the lower desk and the bottom of the top. In fact, if you like larger mice like some of the ones from Logitech, it likely won’t even fit on the desk when closed. 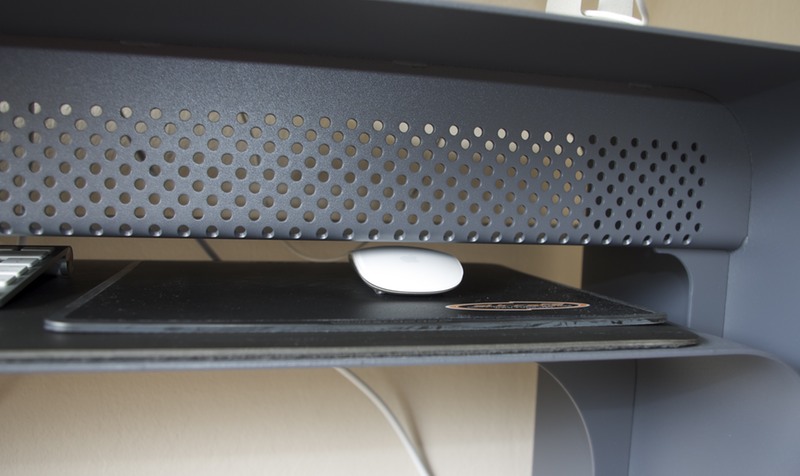 My Laptuk (along with the OneLessFile) arrived a couple weeks later, and I was anxious to get my laptop off the floor. The Laptuk was very nicely powder coated, and it matched the OneLessDesk perfectly. I put it on the desk, and it looked great; my MacBook Pro slid easily under it, and the Cinema Display looked quite nice on top. The top of the desk is quite smooth and so is the Laptuk so it slides around a bit. I’m looking for a good way to keep it from moving around, but it’s not an emergency. Now I was ready to begin using my desk again. Then I ran into another small snag. While the monitor used to be at the perfect height, now with the Laptuk, it was too high. And thanks to Apple design, there’s really no way to fix this without replacing the stand or ditching the Laptuk. 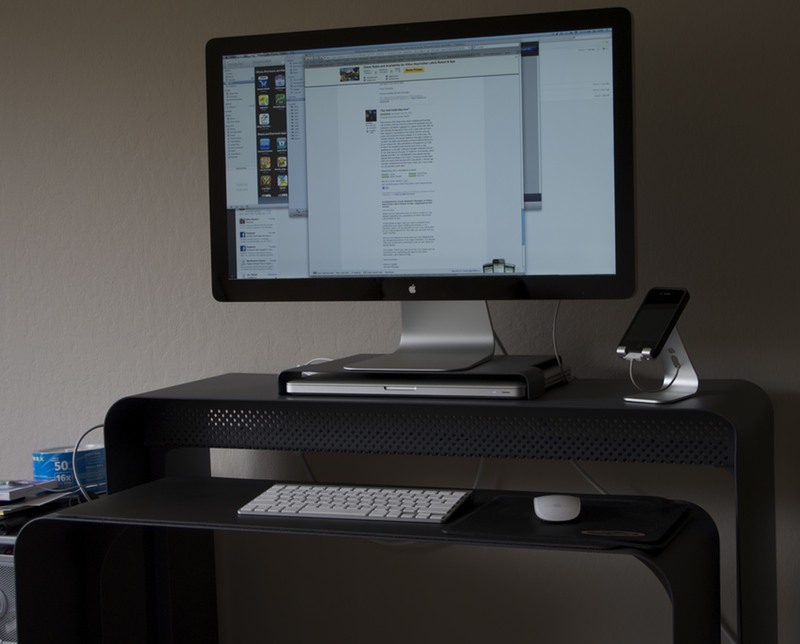 This is actually an issue I still have not fixed. The monitor is a few inches higher than is comfortable for me to view. I’ve been considering getting an arm like the Ergotron MX in order to give me flexibility, but if I used that, there would no longer be room for the Laptuk, and there really wouldn’t be a need for it either. Okay so if I get the arm and get rid of the Laptuk, then I might as well just put the computer back on the floor. Then I’m back to where I started! So where am I going with all this?

I think the OneLessDesk is the perfect desk for an iMac with a Magic Trackpad. As soon as you bring a mouse and a mousing surface into the picture, it no longer fits perfectly, and the look isn’t preserved. If you have a laptop that you use with an external monitor, there’s no good place to put the laptop. If you use the Laptuk, the colors won’t match properly. If you get your Laptuk powder coated by Heckler Design, then it will match, but your monitor will be too high. If you have a Dell monitor or something else that is adjustable, then fine… you’ll be okay. But if you have an Apple monitor, then the screen will be too high. I’m still considering some replacement monitor stands. The best solution is to probably find a good spot for your MacBook that is off to the side of your desk. I’m also considering a Henge Dock. I could put my laptop in here vertically and put it behind the Cinema Display. 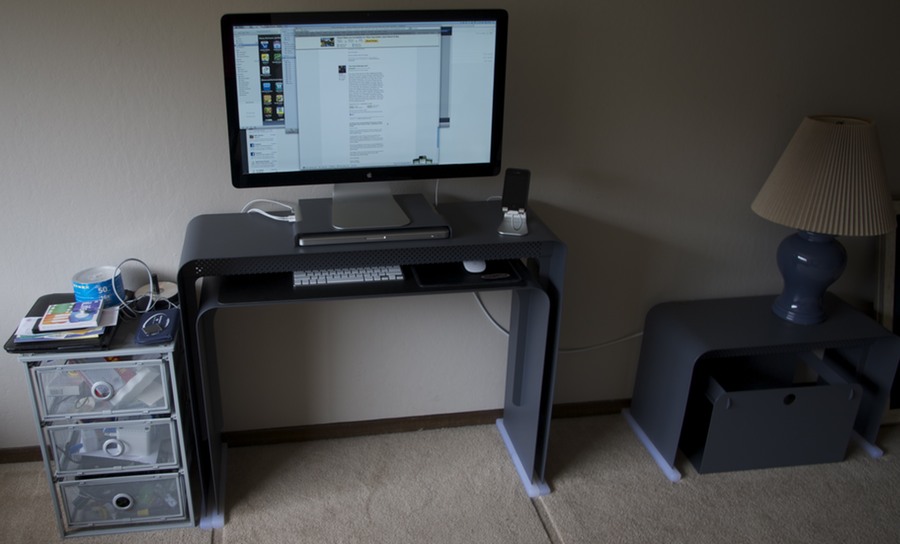 In conclusion, I really like my OneLessDesk. In fact, I really like Heckler Design as a whole. That company keeps coming out with neat products, and I think the new TV stand they are going to release looks amazing. However, keep in mind that when you get a desk with this form factor, it comes with tradeoffs. You’re going to have less space. You’re going to need to carefully think about how everything is organized. If you have a small apartment and an iMac, though, then this desk could be a no-brainer! Anyhow, these are my thoughts after having this desk for a couple months. I’m going to figure out how to best deal with some of the issues I have, and I’ll write another post in a while, detailing what I’ve done since then! 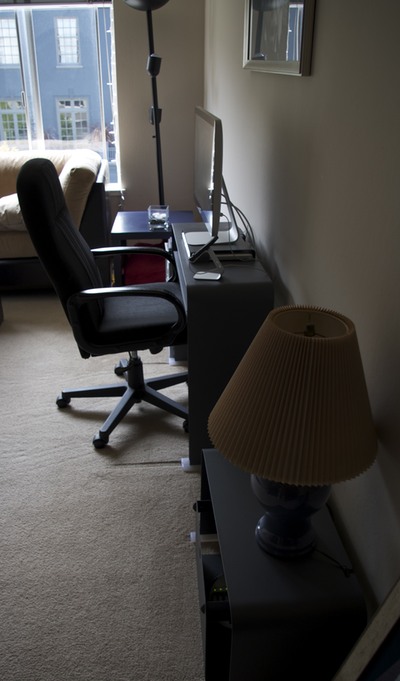 17 thoughts on “Pictures and Thoughts: My Heckler Design OneLessDesk”